Academy Petroleum’s Snubbing Slips (also known as Snubbing Grippers) are used on a snubbing rig to securely hold the pipe being run in, or pulled out, of the well. They feature a double acting hydraulic cylinder which will grip and release the pipe automatically when the control valve is operated by the snubber. Differing styles of slips are used to support either the weight of the pipe or the pressure load trying to push the pipe out of the hole. As well, some types of slips need to move with the pipe (travel) and some hold the pipe stationary while the traveling slips are repositioning on the string.

Academy Petroleum Industries manufactures several different types of Snubbing Slips to fulfill these various roles. These Snubbing Slips are used throughout Alberta, the Middle East and around the word.

The Traveling Heavy version of the slips is pictured at right. They are intended to support the weight of the pipe and are mounted on the traveling plate of the snubbing rig so that they move up and down with the pipe. As they are the uppermost slip on the snubbing rig, and no additional equipment is mounted above them, Traveling Heavies are only supplied with a bottom flange to mate with the traveling plate and no upper flange. 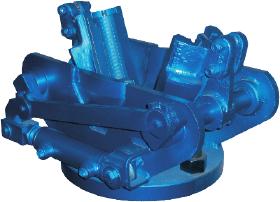 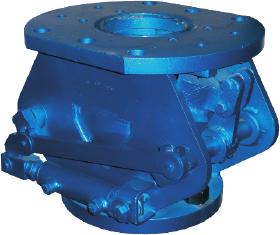 The Academy Snubber Slips can be used in three configurations: a Stationary Snubber, a Traveling Snubber and a Stationary Snubber. The picture shows these slips in the stationary heavy configuration. There is a 7” bottom flange for mounting the slips directly to the top of the BOP stack, and a custom sized top flange for bolting on the stationary snubber. When used as a snubber (either stationary or traveling) these slips are inverted. For example, the traveling snubber would have the 7” flange on top for bolting to the traveling plate. 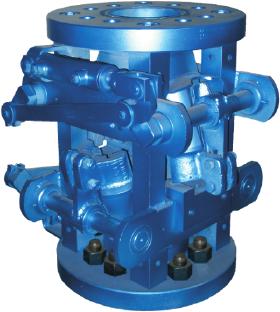